How Many Hours Per Pound to Smoke Brisket 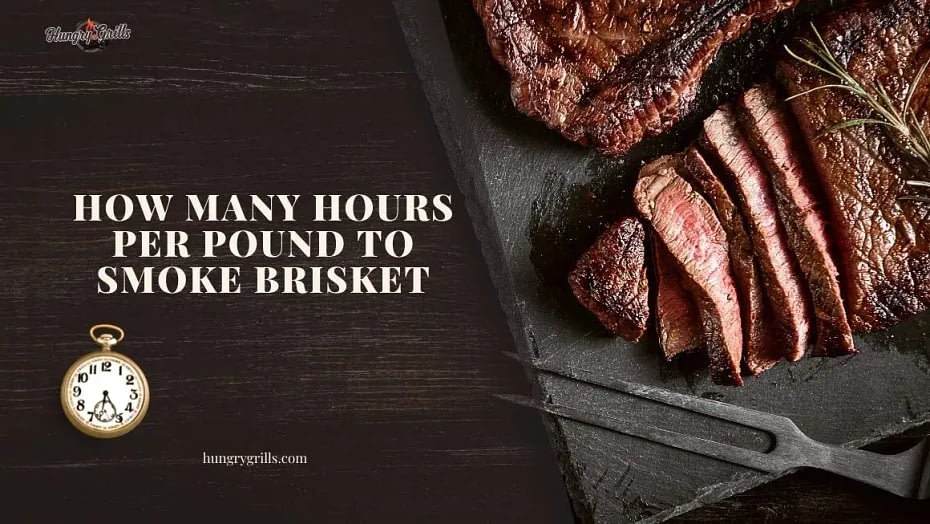 The best chef wants his dishes to be top-notch ones. Mostly, cooking brisket at a low flame is the trend, but the biggest concern is – how many hours per pound to smoke brisket are needed?

If the temperature is between 225 to 250 degrees Fahrenheit, the cooking period will be 1hour or 1 and a half an hour per pound. But this isn’t the rule of thumb because many vital factors influence the cooking.

As we said, this time isn’t a rigid theory to establish. However, if you have many guests to serve, this idea of time will be much handy to manage the event.

How Long to Smoke a Brisket Per Pound

Well, how long the brisket will be cooked certainly doesn’t depend on the time. The smoker and a brisket size have a huge role to play behind the answer. Generally, it takes 1.5 or more hours to smoke per pound of brisket.

The mentioned time is appropriate to achieve a tender result and a juicy brisket on your plate.

How Many Hours Per Pound to Smoke Brisket

Though no hard and fast rule is here to cook a brisket, you’ll love to know the answer. Starting from 30 minutes, the meat might take more than two hours.

Why the meat takes this much time? The answer is related to some factors, including both temperature and the way of cooking. To provide you with a rough idea about the timing, the brisket takes 1.5 hours for one pound. It’ll be less than 50 minutes if the temperature rises to 300 F per pound.

Also, expect at least 16 to 18 hours if the brisket is 12 pounds. Not to mention, the brisket will require more time to rest before serving on the dining table. As a cook, you must allow this extra time for the meat to be more delicious and juicy. Because other spices need proper penetration time and species make the dish more mouthwatering.

Why should anyone be anxious while cooking a brisket? Know in-depth about the important factors, and your anxiety will convert into enjoyment. Let’s roll.

The smaller-sized brisket will take less time to cook because the heat will surround the meat efficiently. Think of a larger meat piece. It’ll take longer to heat the meat properly because of the amount of mass and spices to be ready to consume.

On the other hand, not everyone has the time of eternity. Speed up the cooking time by wrapping the meat in foil. This will decrease the time of cooking and will be ready to serve within a few hours than usual.

The cooking method can change the whole game in a blink of an eye. We’ve reviewed the best Smoker Grills available in the market, and they have their own specification, errors, and designs. Use yours and find out where the machine lacks. Then, you’ll know how to cook the brisket and the timing.

As electronic smokers are easy to use and predict cooking time per pound, you can buy one of these smokers. The lid is closed, and this method takes lesser time to prepare brisket.

Apart from these factors, meat thickness, fat amount, the environment’s temperature, humidity, tissue composition are the other variables to consider. On a summer day, the meat will be ready to eat in a short time period.

What about winter? In winter, per pound, meat needs more than 2 hours to be ready to serve. To get the desired brisket put the meat in a pan with the addition of liquid.

For a quick result, try to cook on the stovetop and get the brisket ready within 6 hours.

How Can I Shorten the Cooking Time

You might’ve arranged a party and don’t have all day to cook because there will be outsiders, too. Adapt a unique way to speed up the cooking procedures. The most popular and tempting method is to change the temperature and set it high. Well, the ending result for this won’t be satisfactory as the meat won’t taste juicy. A high temperature encourages the environment to soak up all the liquids from meat.

Check on the Texas crutch method to complete the stall faster. To serve the purpose, this way of cooking involves taking the meat off the heat when it is almost 150 F. Then, you have to wrap the brisket with the help of foil paper. Place the meat in the smoker for more hours to prepare for the party. This method allows a short period for cooking for the aluminum foil. If butcher paper is used, it’ll take more time than aluminum foil paper, but the butcher paper helps preserve the crisp taste for its porosity.

If you’re wondering about taste and flavor, let’s tell you the Texas crutch method doesn’t compromise any of it. Even it helps to reduce at least 30 to 45 minutes of cooking time per pound.

Don’t serve the meat at once; it’s out of the smoker. Provide it 1 to 2 hours for resting because it’s the prep time for the meat. And don’t open the lid often because it hampers the balance of temperature in the smoker.

Should I put the fat side up or down?

Keeping the fat side up is a mainstream pattern of cooking. It’s assumed that the tendering of meat will be coming from above. However, it doesn’t influence the cooking time much.

How long does it take to smoke a brisket at 225?

It’ll take between 1 to 1.5 hours to smoke a brisket at 225. Depending on the size, fat amount, it might vary.

We hope this guide has helped you to find out the answer of how many hours per pound to smoke brisket. The answer has no ‘universal truth’ tag line because it relies on a number of important factors. Have a delicious barbecue!