Brisket vs Pulled Pork: Which One Tastes Better? 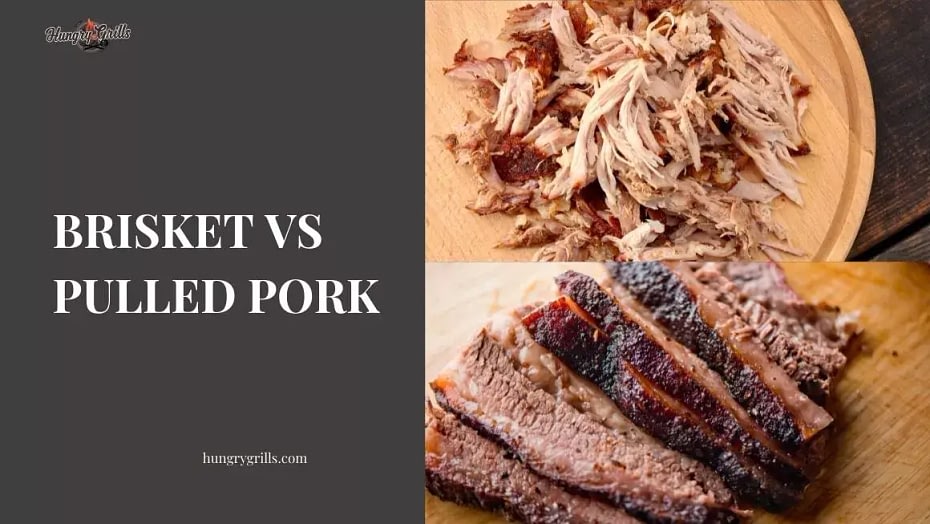 Barbecuing parties have their charm to attract the guests with the flavor of meat in a smoker. Whether it’s a piece of brisket or a pulled pork, cooking each of them isn’t a piece of cake for everyone. The cook has to master that.

Brisket vs Pulled Pork – which one is the best option to start with? Compared to brisket, pulled pork is a better option because of its tissue composition.

Though the internal structure of both of the meats makes them highly qualified for barbecue, pulled pork is one of the best options to start afresh cooking inside the smoker. Smoking two types of meat demand an internal temperature of 200 degrees.

Brisket vs Pulled Pork: Which One is Better

The primary distinguish between brisket and pulled pork is they belong to two different animals. Pulled pork is the shoulder meat piece that comes from the pig’s body; brisket is the breast part of the cow.

1. The Tendency of Drying Out

Brisket is less forgiving than pork shoulder because it tends to dry out in a short time. Choosing pulled pork over brisket is wiser because of its drying nature.

Pulled pork is easier to cook than a brisket. This is one of the reasons why experts suggest mastering pulled pork in a smoker first rather than smoking a brisket. It encourages the newbies to try and explore the barbecuing culture more.

There isn’t something that you could try to make the pork shoulder smoke bad. Provide it with proper resting time, and it’ll come out the best—no hassle during shredding the skin apart and slicing it.

On the other hand, cooking the brisket requires more time and precise temperature. Slicing the piece is another tough step to handle. Also, an imbalance of internal temperature leads to a dry or undercooked brisket to serve.

Factors to consider for right choice

While deciding between brisket and pulled pork, considering some additional but essential factors can land you the right choice. What are the concerning factors:

We can’t unsee the huge difference in pricing between the pulled pork and brisket. The price of brisket depends on the grade. The price isn’t less anywhere in the country.

If we’re specific, the price of brisket will cost 3 to 4 times more than a slice of pork in a pound. Minimize the cost by calculating the amount of brisket and pulled pork per person.

We mentioned earlier that smoking pulled pork is an easy process rather than a brisket. All you have to do is rub the spices on the pork skin and set the smoker’s temperature at 250 to 275F. Use aluminum foil to wrap the meat and marinate it for 4 to 4 hours. Placing the meat in the smoker for 5 to 6 hours will do the job of cooking and penetrating all spices. That’s all!

Now, let’s talk about the processing of brisket. Brisket cooking requires a lot of time, and the cooking part is too complex. Why we call it ‘complex’ is because it has two sections – flat and point. If we dig deeper, the flat portion of meat covers mostly with fat. And the point area is a relatively leaner part. So, balancing the cooking time and setting up an appropriate temperature for flat and the point is a big challenge.

Another catch is the tendency of drying out. This is the crux of the matter as a dry brisket isn’t tasty and expected to be served at the table.

Moving on to the time brisket needs to be ready. Don’t be surprised if the brisket cooking takes more than 15 hours of a day. Also, the meat needs a resting period of up to 5 hours to tender.

You can dodge a bullet by cooking the brisket for a long time and using the pulled brisket in snacks. It’ll taste delicious because shredded skin of brisket is definitely a yummy part, especially kids love meats in a sandwich a lot.

Sometimes, we make the trash of brisket and pulled pork leftovers. The price of meats is high and so, making them trash isn’t worth it. Divide the pulled pork, and the half portion can be vacuum sealed. You can store them in the refrigerator and use them whenever you want to make another dish. Simply, reheat the meat by simmering method or in a microwave. A half-pound of pulled pork will be more than enough to feed two persons.

Leftover brisket is versatile; you can cook many mouthwatering dishes with these slices. Don’t keep the meat intact for slicing it later because it’ll consume more energy and time. So, slice the whole portion when you’re preparing for barbecue.

Can you guess which part the slices belong to? It’s the flat brisket form partially and so; you have to be extra careful while storing the pieces in a vacuum and cooking.

What Is So Special About Pulled Pork?

Pulled pork is a dish that’s made of meat pulled from the pork bone and prepared a tasty dish with different types of sauces, especially barbecue sauce.

It’s a traditional dish made with a low temperature and slow cooking method. Rubbing the pulled pork with salt, pepper, and water or apple cider vinegar. In other cultures, people endure variation while eating pulled pork.

It’s hard to answer if the competition is like Brisket vs pulled pork. Both of the meats are quite popular for their variation usages in the food industry.

Brisket is the best choice when a huge family gathering happens. On the other hand, pulled pork is manageable and great for serving restaurant customers.

Experts say the supremacy of brisket is never beatable. But this isn’t a universal truth to accept since taste bud isn’t the same for everyone.

We hope you got enough information about brisket and pulled pork and can decide which one to cook when you’re in a rush. Happy barbecuing!